We had the good fortune of connecting with Oni the Africanpinupgirl and we’ve shared our conversation below.

Hi Oni, how do you think about risk?
I’ve had always been a risk taker. I know that with great risk comes greater reward, and my life has been a testament to that. I’ve been in Atlanta 4 years, but prior to that I lived in NJ. Had a safe government job making good money. Yet, I wasn’t happy. The cubicle walls were closing in, and I took a risk. A huge one. I decided to quit that job, which I had held for about 15 years and move here to Atlanta. Taking such a great risk, came with the responsibility that I had to chase my dreams like a kid chasing an ice cream truck in the Summer heat. It had to be an ACTIVE chase. That’s what I’ve been doing ever since, and I am started to reap those rewards. Risk taking has played a major role in my life. In fact, I wouldn’t know any other way to pursue my dreams. 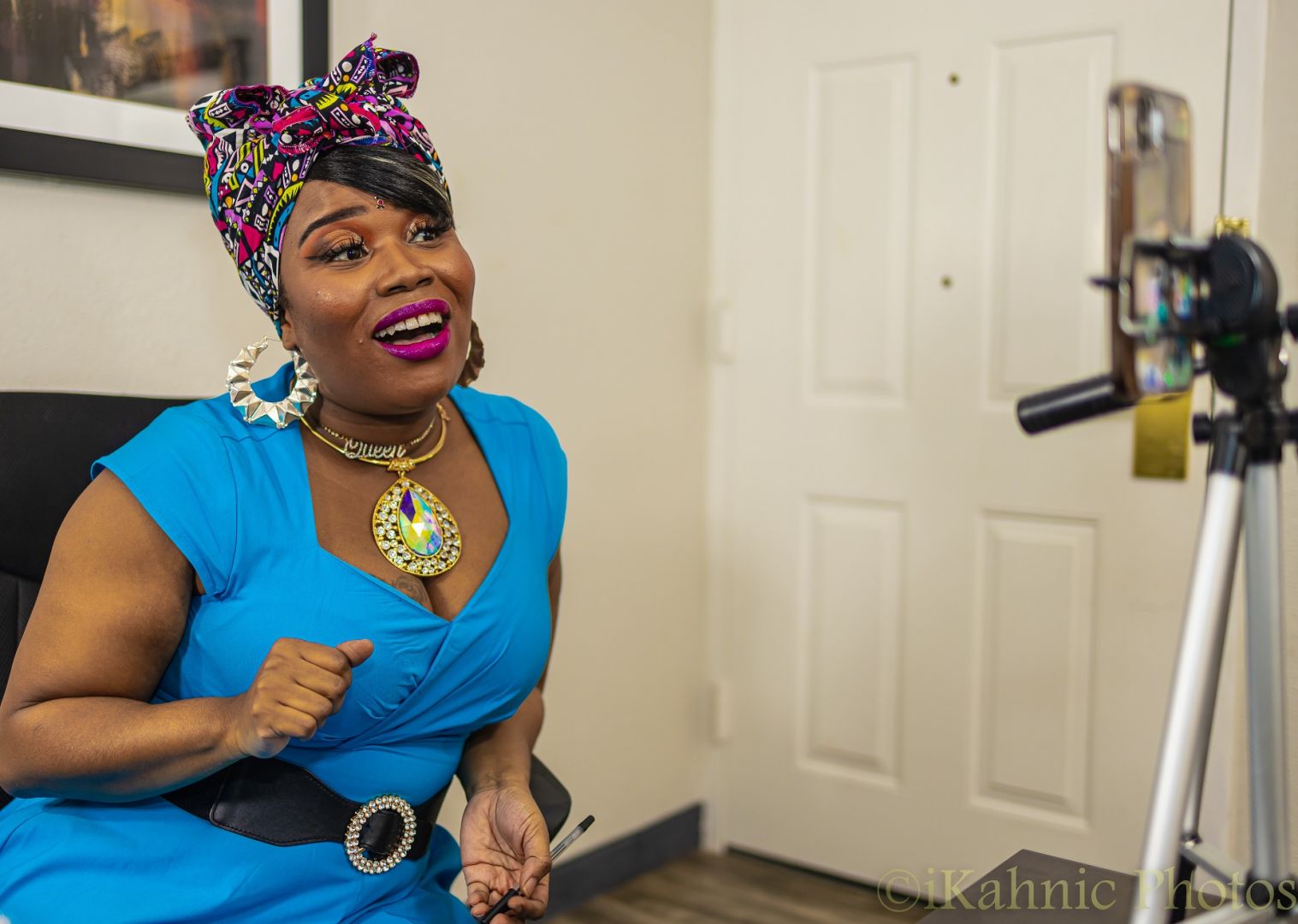 Alright, so let’s move onto what keeps you busy professionally?
I am an true artist. Comedy is my newest art and form of expression. However, I am a polymath. I pride myself on that status because I have worked to become good at whatever I am currently good at. I take the arts, and my skills in the arts extremely seriously. I study and implement and I read constantly. I choose the skills I want to tackle, and then I put in the work to master them. That’s what I am most proud of. My work ethic when it comes to acquiring new skills and obtaining mastery. I also sew clothes, rap, act, and have an acute business acumen. That’s how I got to where I am today, I have come full circle. I have learned so much through trial, and error. It was not easy at all, but the work was all worth it. I was able to overcome the challenges of being a newcomer to Atlanta just a few years ago, not having a steady job here, and money flow problems. I put my head down, and I worked. And worked, and worked. I would study a couple skills simultaneously while periodically putting them into practice until I got better and better. I am still a work in progress. Working to be a leader in my chosen fields. I recently started a new online event. The Pinup Entertainment’s Virtual Open Mic. It’s dope because I get to use my hosting and comedic skills to bring shine and recognition to other people just like me. Performers. Artists. Creatives. My mic is open for comedy, music, spoken word, and is not just limited to one genre. Which I think sets us apart. The other thing that sets us apart is the entertainment value. The Virtual Open Mic promises to entertain. This isn’t a boring run-of-the-mill online event. You will have an amazing time! As the “African Pinup Girl” I am bringing a colorful Afrocentric aesthetic with a vintage flair. I have never been a “mean girl” I have always been a Queen Girl. And I want my fellow queens and kings to be drawn to my events. We are keeping our chakras balanced and our energy high. Good vibes only.

Let’s say your best friend was visiting the area and you wanted to show them the best time ever. Where would you take them? Give us a little itinerary – say it was a week long trip, where would you eat, drink, visit, hang out, etc.
If my best friend Daryl from NJ was visiting me for a week, we would have to go to great food spots because He LOVES to eat! I would take him to Negril Village for an amazing Caribbean brunch with mimosas, then we would hit a day party somewhere in midtown or downtown, I would prefer somewhere with a rooftop such as Tom, Dick, and Hank’s. I also LOVE their zucchini and squash dish. (I’m still trying to recreate it) – The only other food spot I would have to take him to is my favorite wing spot Atlanta’s Best Wings. I get my wings fried 2x crispy and he would love the food there. For entertainment I would take him to some of my favorite comedy spots like Uptown Comedy Corner, Kat’s café, or Smokers n Jokers. I’m also in a comedy networking group, so whoever in the group was having an event that week, we would support by attending that as well. It’s all about supporting each other, and establishing a community with those who hold common interests.

Who else deserves some credit and recognition?
I would love to give a shoutout to my comedy mentor and fellow comedian Weight Ball. I met him at Uptown Comedy Corner at the very start of my comedy career in Atlanta. He took me under his wing, he got me my first stage time at Atlanta Comedy Theater. Not only that, but he has actively mentored me, provided comedy coaching sessions and invaluable feedback. He’s helped me improve my comedy connections, and has been an amazing friend. I want him to know I am truly grateful for his help in opening some of these doors.