We had the good fortune of connecting with JaySee and we’ve shared our conversation below.

Hi JaySee, where are your from? We’d love to hear about how your background has played a role in who you are today?
I am JaySee. I was born in Torrance California grew up in the inland empire, went to school in orange county and I’m currently residing in Los Angeles California. When people ask me where I’m from I told them that I am a SoCal girl through and through.

I have moved over 14 times in my life and living in all of these different Cities has really broadened my perspective on how different people see life. As an artist I’ve been around people in different economic situations and with different beliefs and I really bring all of that into my music.

I have a song titled “SoCal Girl” where I talk about the overwork culture at Southern California and how the cost of living keeps going up and we are all “Losing sleep and dollar bills for a living where we are”, how the traffic is always getting thicker no matter how many lanes they add, and how “ The night is so much brighter in the LA moon“.

California is a very diverse place to live. I am half Cuban, a quarter Mexican, and a quarter Filipino. My Hispanic heritage and being around other Hispanic and Latinx people has definitely influence the sound of some of my songs. My song “Burnin’” Combines a Cuban salsa chorus with a Spanish flamenco verse as I sing about my psychedelic mistress.

To be honest there are also a lot of drugs here in Southern California and I did get caught up with my own substance abuse issues. Since California is one of the states that legalized recreational marijuana I write about my use in a lot of my songs. “Bowl in my garage” for example, is about my relationship with a close friend of mine paralleled with my relationship with weed. Both that close friend of mine and marijuana service muses that help me silence my inner critic and create music that is true to my lives experience. I’m currently in treatment for substance abuse and am working on achieving stability in my tumultuous life.

Being in Southern California has also allowed me to collaborate with a lot of talented artists. I have produced music for other local artists such as Emilio Cole, Miles Arcana, ladywave, and Connor Ried. In my 4 years as a producer I have produced over 50 tracks for my self and my other SoCal artist friends. I am blessed to have been born in a state and an area rich in opportunities and quality people. 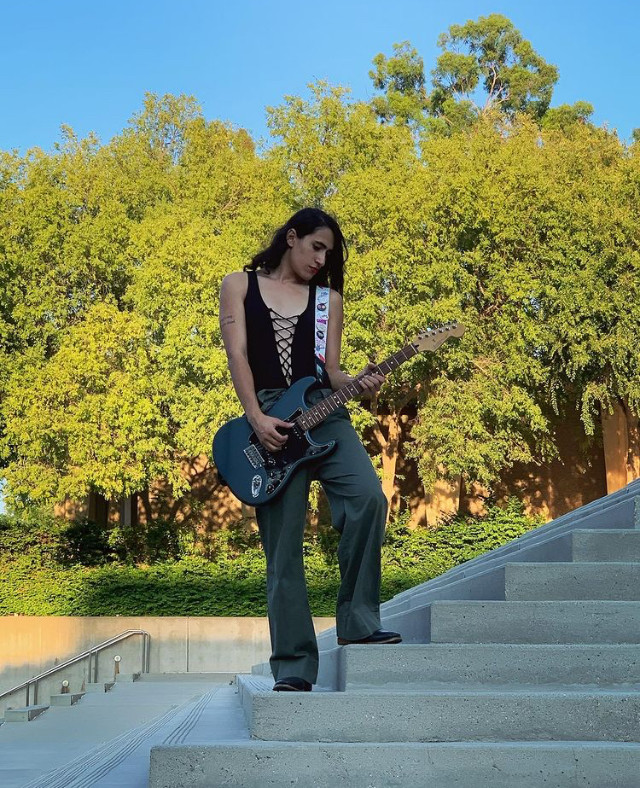 Alright, so let’s move onto what keeps you busy professionally?
Ever since I was in middle school I knew that I wanted to pursue music as a career. I played trumpet from grade school through high school and went on to learn guitar, piano, bass, ukulele, banjo, and The list goes on. But I didn’t get serious about making music until the age of 21.

I bought myself a MacBook Pro and put my nose to the grindstone to learn the basics of songwriting, mixing, mastering, and arranging music through YouTube, online research, and studying the habits of my favorite music producers. I really look up to George Martin, Jack Antonoff, Jon Bellion, and Dr. Dre to a name a few. As I continued putting time into producing I got the opportunity to work with other emerging artists in my community.

In my four year career I’ve produced three albums for other artists and two albums for myself. The first one was A four song EP titled “Lost” and two years later I delivered the sequel “And Found”.

As I was making both of these records I was also going through enormous life changes. I’m a transgender woman who didn’t come out until age 21 and it causes so many positive and negative changes in my life. I have had to struggle a lot more since coming out to family that initially rejected my transition and losing friends who disapproved. It has been a tough road but it has taught me to be resilient in the face of opposition.

I wrote my album “And Found” About these experiences and how they affected my mental health. Losing my social support networks and having an emergence of my bipolar disorder definitely inspired a lot of my work. For example I have a song titled “Overdramatic (SSRI Withdrawal Blues)” is about a time where I lost health insurance and had to go off of my psychiatric medication. No one should have to forgo getting mental health treatment because they can’t afford it.

Some of my songs can verge on being political due to the politicization of simply being an out transgender person. I released a single titled “unlearn” that is about all of the emotional baggage that I had to unlearn from being raised in a homophobic Christian church. Taking away the political viewpoint, I think that everybody has toxic traits that we have picked up on the way and we all have things that we would do better to unlearn.

I put my entire soul and my heart into my music and the feedback that I’ve gotten from being honest about mental health, being queer, dealing with substance abuse, and being overworked and underpaid Has been heartwarming. I hope that I am able to continue to afford to make music and I am appreciative of Shoutout Atlanta for giving a voice like mine a platform to share my story.

Let’s say your best friend was visiting the area and you wanted to show them the best time ever. Where would you take them? Give us a little itinerary – say it was a week long trip, where would you eat, drink, visit, hang out, etc.
I would definitely check out California‘s beautiful beaches. My favorite is 1000 steps Beach in Laguna Beach California. It is a more isolated beach with a beautiful water carved caves in rock structures and it’s just a wonderful place to soak up the California sun. After going there I would hit up the beachcombers café for a tasty meal and finish it off with a shake from the Ruby’s Shake shack walking distance from beachcomber’s.

Shoutout is all about shouting out others who you feel deserve additional recognition and exposure. Who would you like to shoutout?
I would love to shout out Emilio Cole, Connor Reid, ladywave, and Miles Arcana for giving me the opportunity to work on producing some of your music. I believe in the talent that all of you guys have and I am so excited to see what are you guys will all create in the future