We had the good fortune of connecting with Jamie Allen and we’ve shared our conversation below.

Hi Jamie, every day, we about how much execution matters, but we think ideas matter as well. How did you come up with the idea for your business?
During the past couple of elections in Georgia, I saw a lot of my friends and other good people trying to make a positive difference and help everyone vote. Some people were handing out water and snacks at polling stations, others were giving rides to polling stations. I took a snack wagon to my local polling place. My friend Damon Sgrignoli was posting video updates on the long lines at stations around town, and offering people advice and inspiration. While it was encouraging to see, it was also a bit reactive — we were playing catch-up and reacting to what was happening on an election day. So I thought, since all these people are motivated to help get the vote out, why don’t we all come together before the election and chat about what we might be able to accomplish? Why don’t we try to come up with a plan? Why don’t we try to be greater than the sum of our parts? This was also around the time when Congressman John Lewis passed away. We were all inspired by his lifetime of work for the greater good, for creating “good trouble, necessary trouble.” So I asked Damon if he wanted to get some people together to talk about the election, and he said yes, and the next thing we knew we had a Google Meet that got the ball rolling. We have about a dozen regulars helping out — including Molly Dickinson, Tom Bell, Stephanie Stuckey, Sarah Lawrence, Gino Gianneschi, Terra McVoy, Matt Allen, Dan King, Laura Newsome, and Aaron Armstrong — with skill sets ranging from business to strategy to design to writing to marketing. We call ourselves the Georgia Troublemakers. Our mission is simple: We are a volunteer group that fights voter suppression by helping to get the vote out through web and social media, in-person events, community building, and more. We create “good trouble.” Of course, our ultimate mission is to turn Georgia blue. There are a number of other organizations like us that have popped up during this election, and that is inspiring to see. 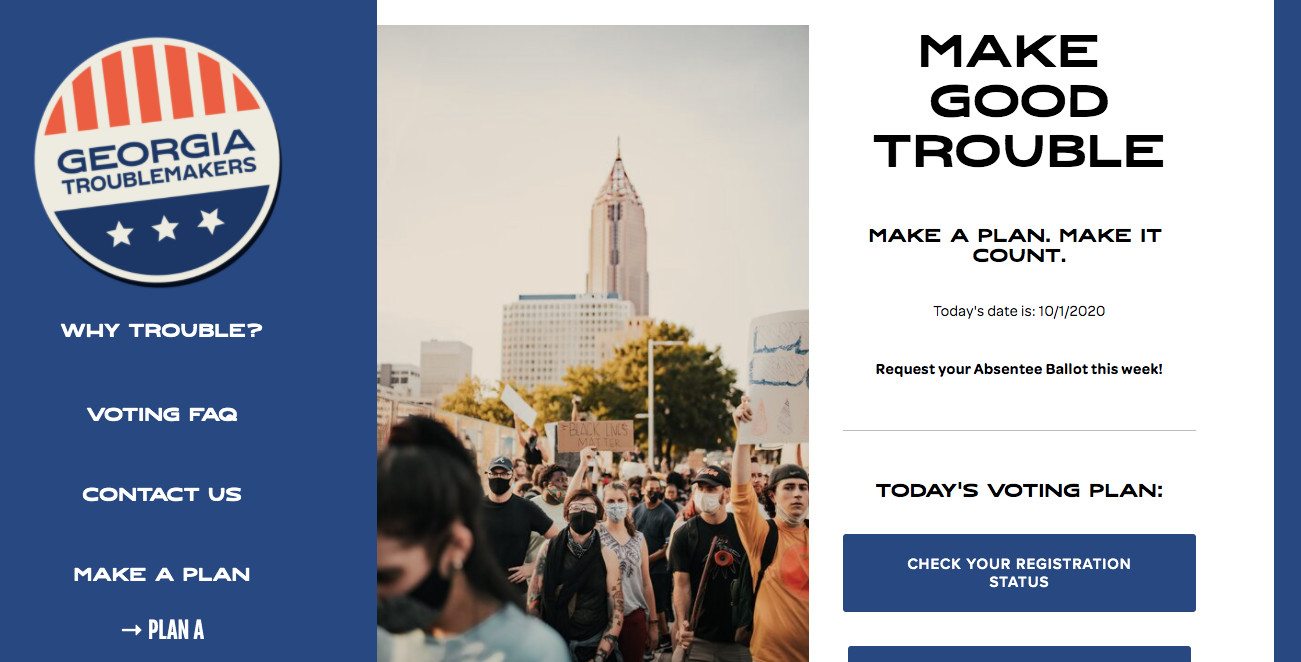 Alright, so let’s move onto what keeps you busy professionally?
I’m a writer who has been lucky enough to participate in a number of fun projects, including a community-building endeavor called the Squirrel Census that also sports an All-Star team of creatives. What I’ve learned most is that it’s important to be willing to give up control and collaborate with others. 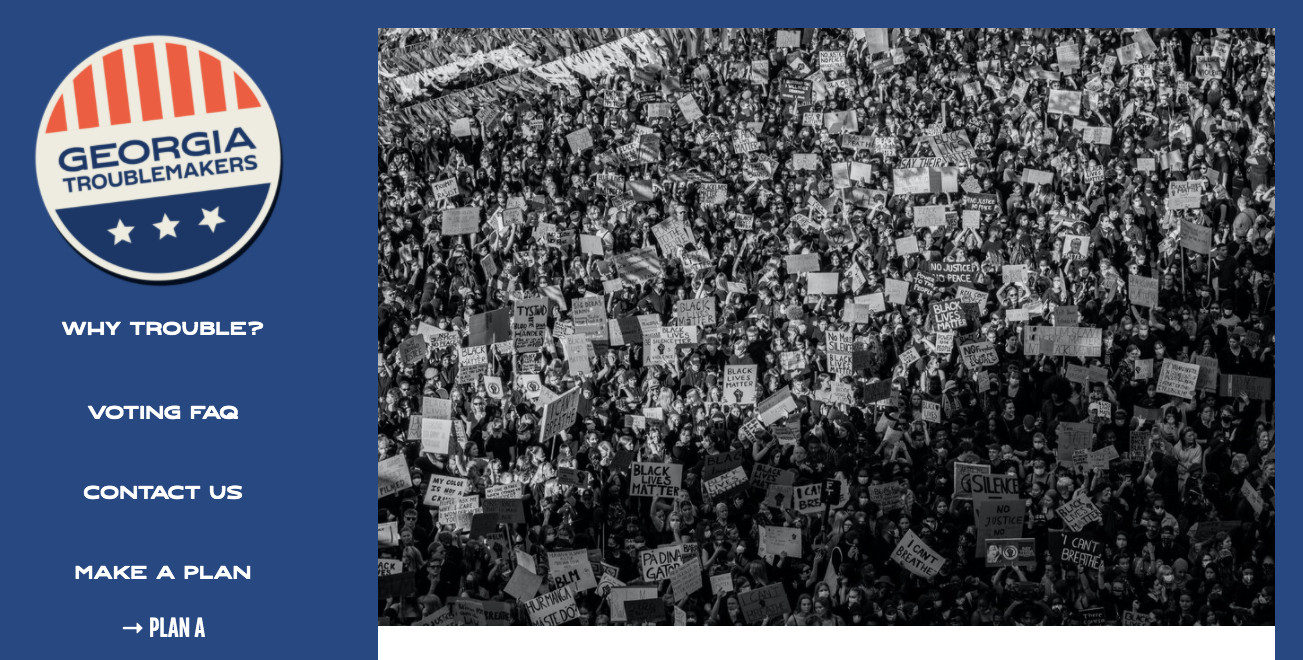 If you had a friend visiting you, what are some of the local spots you’d want to take them around to?
I live in Inman Park, so we would start here. We’d get sandwiches and drinks at Victory Sandwich, maybe play a little ping-pong, and then head over to the King of Pops window for dessert, enjoying our pops while taking a Beltline stroll. Refreshed, we would head west to the Old Fourth Ward and the Martin Luther King, Jr., Memorial, Ebenezer Baptist, and MLK’s birth home. We’d continue west down Sweet Auburn to a place called Constellations, a shared workspace dedicated to civic and social change, founded by my friend Gene Kansas. Gene knows just about everyone in Atlanta, and he knows the city’s history well. I would pick up some itinerary inspiration from him and follow it to the letter. Then we would head to the National Center for Civil and Human Rights and maybe walk around downtown a little (and maybe I would show you the spot where I got “arrested” for no reason, with my kids watching, while peacefully protesting this past spring). And then — is this all in one day? — we’d drive south to Oakland Cemetery and then South-side Cemetery. Cemeteries are cool. Hungry? We would continue down to Pho Dai Loi in Forest Park. Atlanta has an underrated pho scene, and this is the best spot in town. … At some point, I would probably take my guests to Kennesaw Mountain in Marietta, making sure to hike up the backside, Pigeon Hill, which is the prettiest way to climb the mountain, and you can still see the trenches dug by the Confederates. The Civil War wasn’t that long ago, you know. Then I’d drive them through Buckhead to gawk at the ridiculous mansions and wonder what in the world these people do, and then follow that with a jaunt to the ostentatious Restoration Hardware, which looks like a boutique hotel located smack-dab in the middle of Buckhead. You can ignore the sales people and take the elevator to the big patio thing on the 6th floor and get a great view of Buckhead and the city. If you are really daring, you can pull out a flask of whiskey, take a sip, and recite James Dickey’s “The Buckhead Boys” to your date. As far as other dining and drinking goes: Carroll St., Café in Cabbagetown (mussels, steak), Gaja in East Atlanta (anything), Monday Night Brewing in West End (along with the beer, Beltline people- and dog-watching), Kimball House in Decatur (oysters, cocktails), Ruby Chow’s in Old 4th Ward (the placemats, designed by Office of Brothers, are alone worth the visit), Fontaine’s in the Highlands (lobster bisque), The Colonnade on Cheshire Bridge (close to where police once shot a drunk chimp; true story), The Albert in Inman Park (burgers, wings, and the fried-chicken sandwich), Fellini’s in Candler Park (pizza, families), and any number of Vietnamese, Mexican, Korean, and Chinese places on Buford Highway. Also, while cruising Buford Highway, it’s nice to visit The 57th Fighter Group restaurant and bar, and watch the planes take off and land. I also like Piedmont Park and the squirrels that live there. And back in Inman Park, I know the squirrels personally, and I have a standard walking tour that I give, which often ends at dirty, wonderful Elmyr. Oh, and a trip to Atlanta would not be complete without a midnight stroll through Candler Park Golf Course. But be careful where you are walking because you might trip over a gaggle of drunk teenagers. This is all assuming we’re not in the middle of a Pandemic.

Who else deserves some credit and recognition?
The Georgia Troublemakers consider Congressman John Lewis our champion. He dedicated his life to serving people through civic and political engagement, fighting for equal rights, even risking his life to do so. We are simply following in his footsteps, carrying the baton for the next lap. Additionally, I always like to INSIST that every Atlantan reads, Where Peachtree Meets Sweet Auburn, by Gary Pomerantz. A friend of mine, Terry Goggin, recommended it to me long ago, and I’m forever thankful that I took his advice and cracked open the book. It’s a history of Atlanta told through two prominent families — the Dobbs and the Allens, one Black and one white. It is also a history of our country and the fight for equal rights. For anyone interested in learning how we — Atlantans, Americans — got to this current social and political moment, this book is essential, foundational reading.