We had the good fortune of connecting with Casey Krevinghaus and we’ve shared our conversation below.

Hi Casey, we’d love to hear about how you approach risk and risk-taking
On the other side of uncertainty is opportunity. Actively choosing to not work a 9-5 has been a very rewarding experience for both me and my husband Levi. The idea that I would not have a promised paycheck at a certain time was scary to think about. Then I started to evaluate how I was spending my time. I was using my talents and resources for someone else’s business and success. And— they were very successful. Why couldn’t I take the talent and resources I was freely giving to someone else’s team, and put it back into my home team instead? Then I realized I could! When I reframed my focus, and gave myself a chance, opportunities became so abundant for us, and momentum has not let down. My husband has been paramount in encouraging this freeing and inspiring frame of mind and cultivating these opportunities. Taking this risk has allowed our success to flourish, and enable our passions to grow more than we could have imagined. 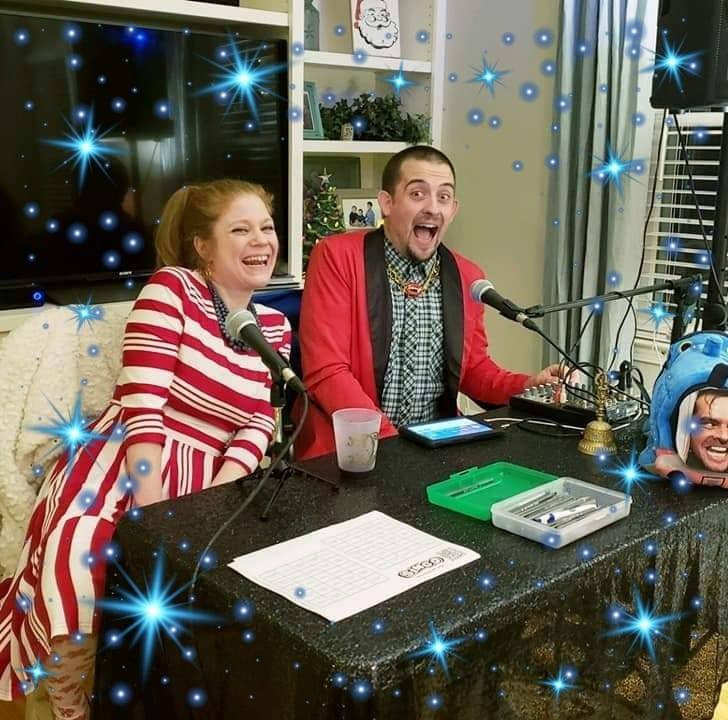 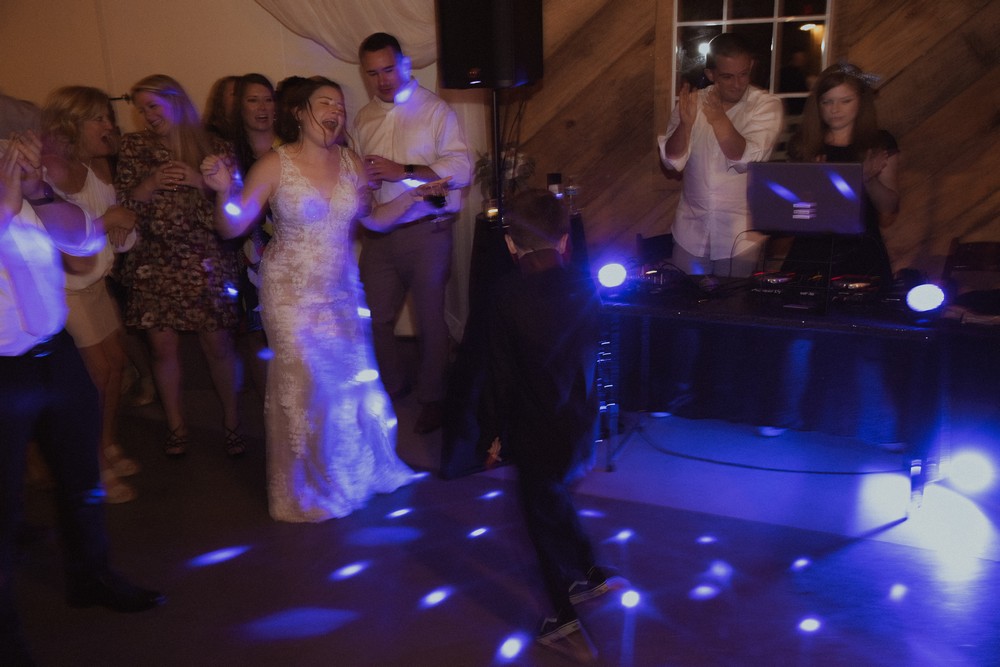 Can you open up a bit about your work and career? We’re big fans and we’d love for our community to learn more about your work.
I have always been a theatre kid. I graduated from UT Knoxville, in 2006 with my degree in theatre. I have always loved it-especially musical theatre, since I am a singer. I had been doing a lot of professional and community theatre in the area and actually met my husband Levi doing a production of Scrooge at the Oak Ridge Playhouse. His role was actually TBA, and I was cast as Isabelle. We met during a rehearsal. He was up on stage playing Bob Cratchet, and when he finished his scene, he hopped off the stage and immediately introduced himself to me “ Hi I am Levi!”, before I went up to rehearse for my scene! I had thought he was SO talented when watching his rehearsal,and wondered if he was in grad school for acting at the time.  Long story short— we instantly connected. You know how when people say, “When you know you know?” It sounds cheesy but it was and is true- at least for us! I won’t get into ALL of the details, but we began dating the day after Thanksgiving in 2010, and have been married for 7 years of foreverness. We are so lucky to have shared passions and be able to do what we love together. We were actors who never wanted a 9-5, and were willing to do some production work and other side hustles to make that possible.  So I left my 9-5 job back in 2013, to work for Jupiter Entertainment ( now known as The Production Hive), in casting.

I did casting for Snapped Killer Couples from 2013-2015, and  also for #KillerPost. I really loved casting- painting with people as I call it! In 2014, Levi and I decided we needed to get an LLC and begin our own casting company, so we could be hired to do casting for other productions. Our company name was Southeastern Casting.  We soon began wearing more production hats; Levi did stunt coordinating for a ton of the Discovery ID,TV ONE, Oxygen channel crime re-enactment shows while also maintaining acting and producer jobs. I was casting close to 100 plus people every two weeks from the leads down to the extras, and let me tell you I did not sleep very much hah! We decided we needed to change our company name to Krevinghaus Entertainment. We became a company that could be a catalyst for entertainment such as provide producing services, stunt coordinating, and be hired ourselves as actors. We had decided back in 2014, we needed to get to Georgia asap, because there was so much happening in tv and film here, and we wanted to get in on it!We moved to Georgia after I got hired as a bartender at Truck & Tap, in Alpharetta, in 2017. We moved right before they opened. As you know there are always permitting hoops to jump through for any business— so my “start” date kept getting moved, and the bank account was getting worried. The bosses at Truck & Tap gave the new hires the opportunity to make some money working construction at Prep Commercial Kitchens, until they got the go ahead to open up. I jumped on that bandwagon, and got up at 5 AM to get to my 6 AM construction job! We did the smaller stuff like painting, caulking, or an occasional floor grinding, so they could work on the bigger jobs. It was a great time haha!

Once Truck & Tap opened I began bartending and told them about this fun game I used to host back at Barleys, in Maryville, Tennessee called SINGO. So, Truck and Tap got the stuff and booked me to host for them at each of their locations. Well, that took off and became hugely popular. There have been nights where there are over 140 people coming out to play, making a slow week night into the business that a Friday or Saturday would be for most places! People started to want private parties and events. Then the pandemic hit, and live entertainment got shut down. During that time we couldn’t allow the momentum to stop, so we rose to the challenge and hosted for Truck and Tap virtually. People would hop on from all around the US from Rochester NY, to Los Angeles, to play because their family or friends in Georgia told them about it and how much fun they were having!

It became apparent to me during the pandemic that I needed to figure out how to do all of this myself. I did some research and found what I needed to cut and curate my own music bingo game complete with cards. I eat music for breakfast so this comes naturally to me. Levi was very encouraging to me to find the balance I needed even if it meant to leave bartending and to make music bingo the main thing. He kept reminding me that I would have more time in the day & more balance, while also having the opportunity to make more money! Boy, he was right! When live events started again, the calendar just starting filling up so fast Levi began picking up gigs due to the high demand, and now this is what I am doing for the most part— well that and djing! I had no idea, this was going to become this whole entity, and we are having a blast. To see the joy on people’s faces, and people singing along and connecting with each other just fills me up inside.Since I decided to fully embrace music bingo and dj-ing as another facet of my entertainment wheelhouse, I have more life balance, and have been able to work on projects I am excited about such as vocals on John Dixon’s upcoming album, or voiceover work which is something I love doing! I didn’t realize how if I focused my energy on one thing that I loved instead of several things “I kind of like,” that I could be successful at the thing I loved! I had to give myself the chance! You have to roll with the punches and focus on the things that bring you joy and balance, and stop worrying about scenarios that don’t exist. Life is much simpler than we make it- make what you love into an opportunity for yourself. 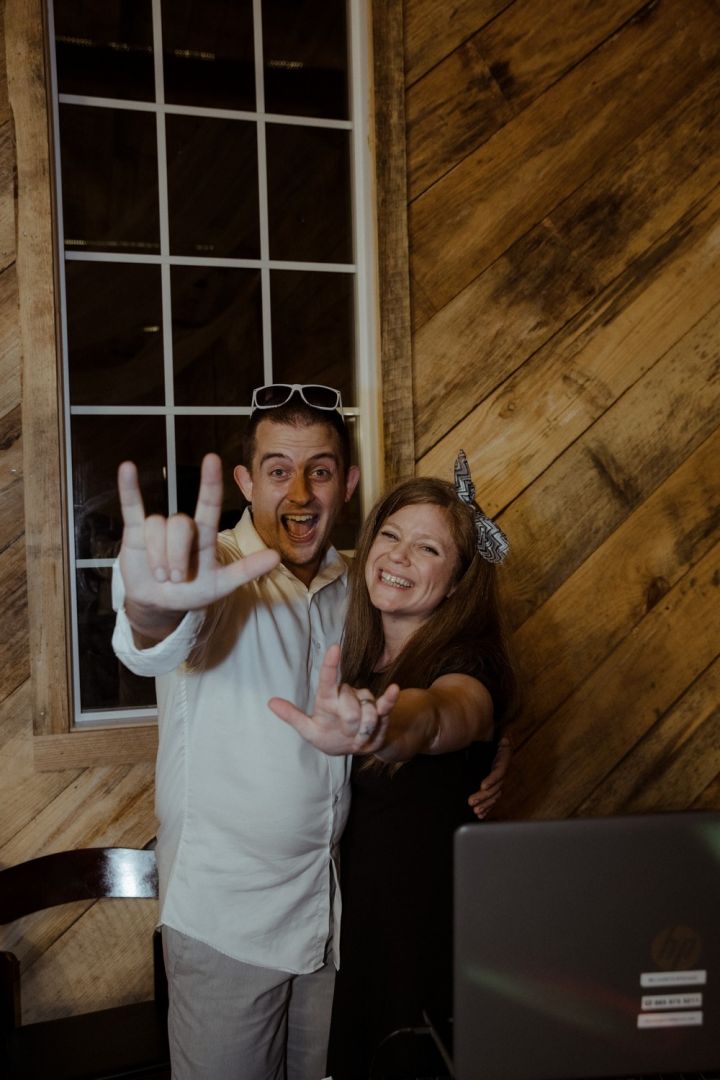 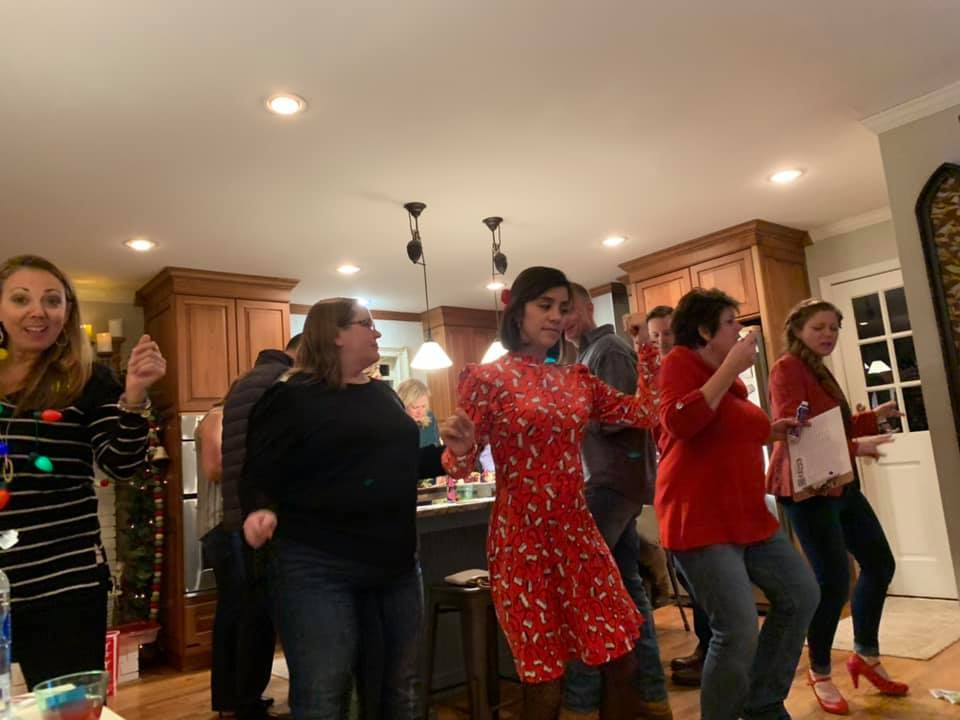 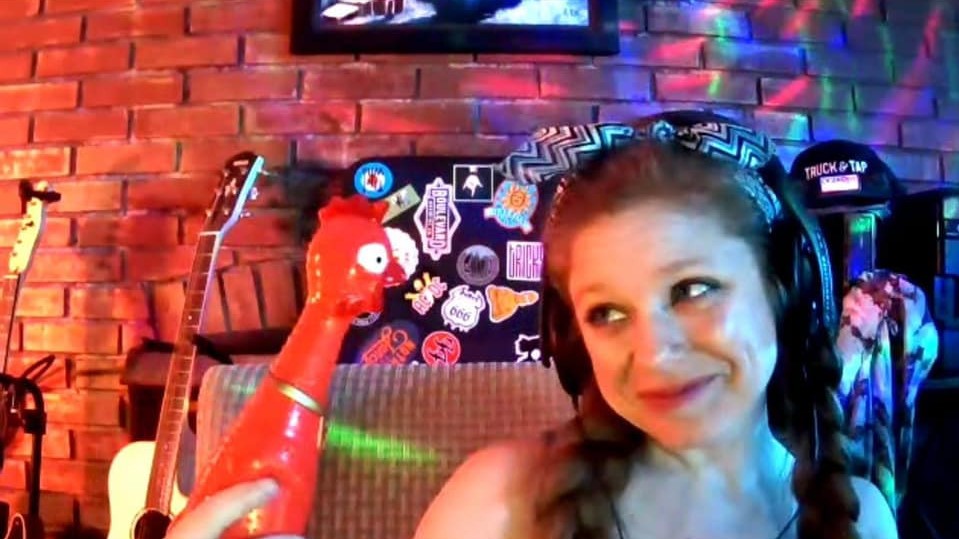 If you had a friend visiting you, what are some of the local spots you’d want to take them around to?
We would do a progressive dinner! We would start the day at “Come And Get It” in Marietta! Their southern comfort food will make you feel like you are wrapped in a warm quilt made by your granny, while eating chicken and dumplin’s that melt in your mouth. The owner of that establishment is very warm and welcoming, and is part of the reason why that spot is SO special. I forget his name, and really wished I remembered it, but he makes it a point to connect with every customer. When my dad visited from New York, he guessed what street he was from and had never met him before in his life. I cannot explain that phenomenon, but it was crazy cool. Next we would find the Meatballerz truck and get a Pompei in a hole, which is their spicy meatball, cuddled in melty mozzarella sandwich goodness . It is so good it will make you cuss about its amazingness between every bite-literally the best balls you will ever put in your mouth! ( I wonder if that will make it into the article?) Since we are super stuffed at this point in time, we may as well over-do it, and go to From The Earth Brewery to catch one of their amazing parking lot concert series shows while enjoying a Goin Out West IPA, and shamelessly downing their Pimento Cheese Fritters, that Chef Joey sprinkles with candied bacon bits. This appetizer comes from Heaven. Chef Joey really does a knock out job with their menu! Day two we would go to Fred’s Meats And Bread and stuff our faces with the Korean Chicken Philly sandwich. Talking about this now, makes me want it-so crave-able, and easy to eat. It is the spot we go to for our birthdays and anniversary. And last and certainly not least is Che Butter Jonez. You have to check their hours and get there early because they sell out fast! Their menu changes daily! Don’t miss out on That Sh*Ts Slambing! ( their smash lamb burger and shrimp fries )The level of flavors you get from any dish at Che Butter Jonez makes you feel you have” been Locked out of Heaven!” 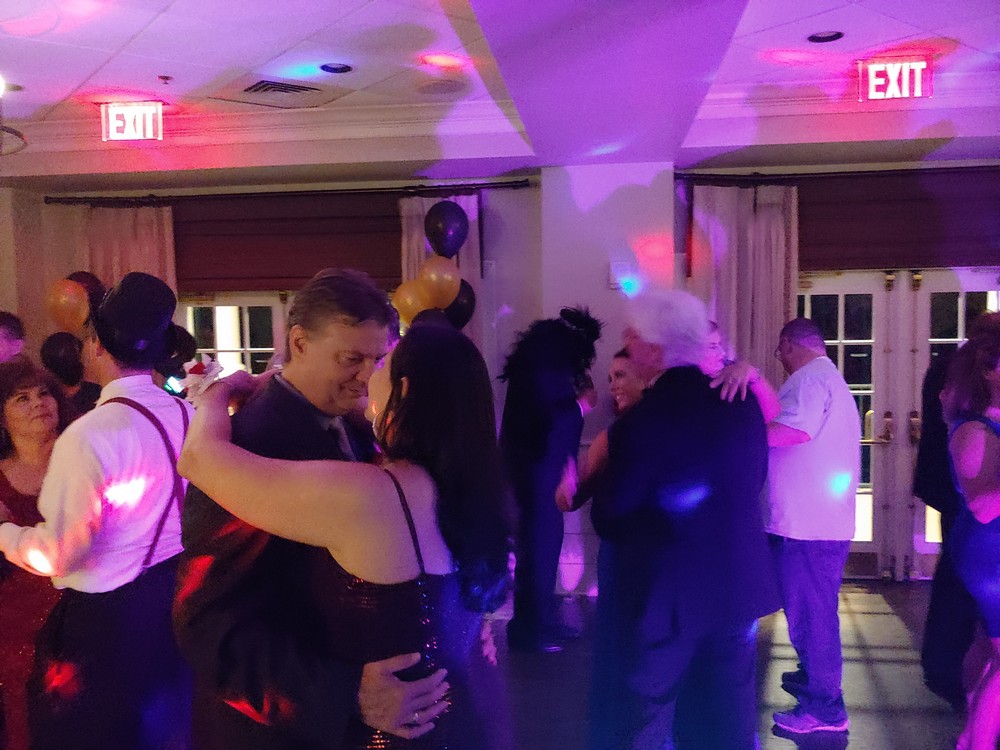 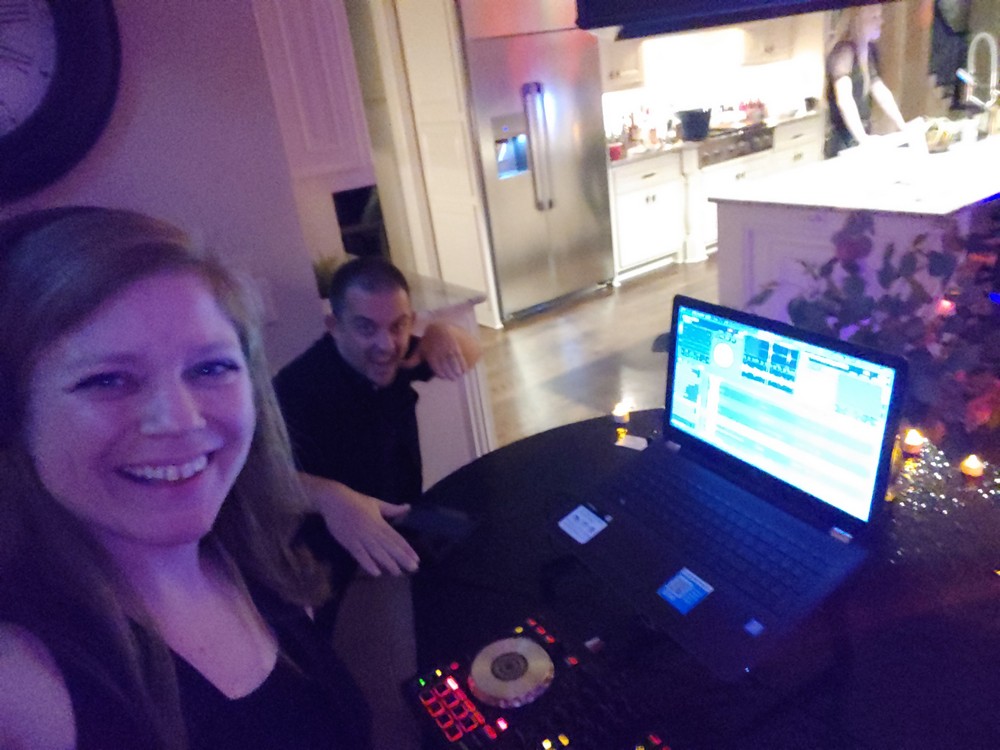 Who else deserves some credit and recognition?
My family, and of course I want to thank my husband Levi for encouraging me to take the big leap into fully leaving my “9-5” to work in entertainment—-wearing the many hats I wear best- whether it is host music bingo, doing voiceover work, Dj-ing or singing, Thanks to him, I have curated my own music bingo game that keeps me booked almost 7 days a week and have learned how to DJ! Levi has grown our business so much by picking up music bingo on days I am booked and he isn’t booked on a film gig acting, producing, or sound mixing.That is so amazing! He introduced me to our super talented friend John Dixon, who we had the pleasure of doing vocals for on his upcoming hip hop album! I look forward to singing with John on more projects. I am so thankful to be constantly surrounded by such supportive and talented individuals who uplift, inspire, and edify each other! How did I get so lucky?