We had the good fortune of connecting with Brooke Yamada and we’ve shared our conversation below.

Hi Brooke, how do you think about risk?
A ton. My dream is to become an Oscar-winning actress which is essentially knowing that there’s a 99.99% chance you’re going to fail and get rejected, yet choosing to do it anyways. I remember my first role I ever got I was basically betting on myself because I’d wanted to quit. Without taking that risk of auditioning, I don’t really know where I’d be. I’m also in the process of applying to college which in my opinion is an 100% bet on your abilities and capabilities. But honestly, I’m grateful for it. I think when you’re faced with the decision to take risks, you realize who you are. Do I audition for the role or not? Do I decide to put all my eggs in one basket and apply Early Decision to a college? In both situations the odds are stacked against me; but knowing that there’s that tiny, tiny chance that I can be happy is enough. Having a Liver transplant at 4 months old, though I don’t remember any of it, I take a risk just by living everyday. I know that one day my medicine could not work and my liver could turn on me. But that’s not what life is. Life isn’t waiting for the perfect opportunity, it’s taking the one that’s a shot in the dark because the reward is so fulfilling and meaningful. Even super small risks on social media count. This might sound silly, but I really went back and forth on starting my food account on Instagram because I was afraid of what other people would say. That’s also a huge part of taking a risk: how thick is your skin? Taking a risk is scary because the beginning is the part where life hits you the most. You’d think that you’d be rewarded but nope! And I think that’s why only the very few make it. The people who believed in themselves enough to drown out the noise of other people’s judgements. 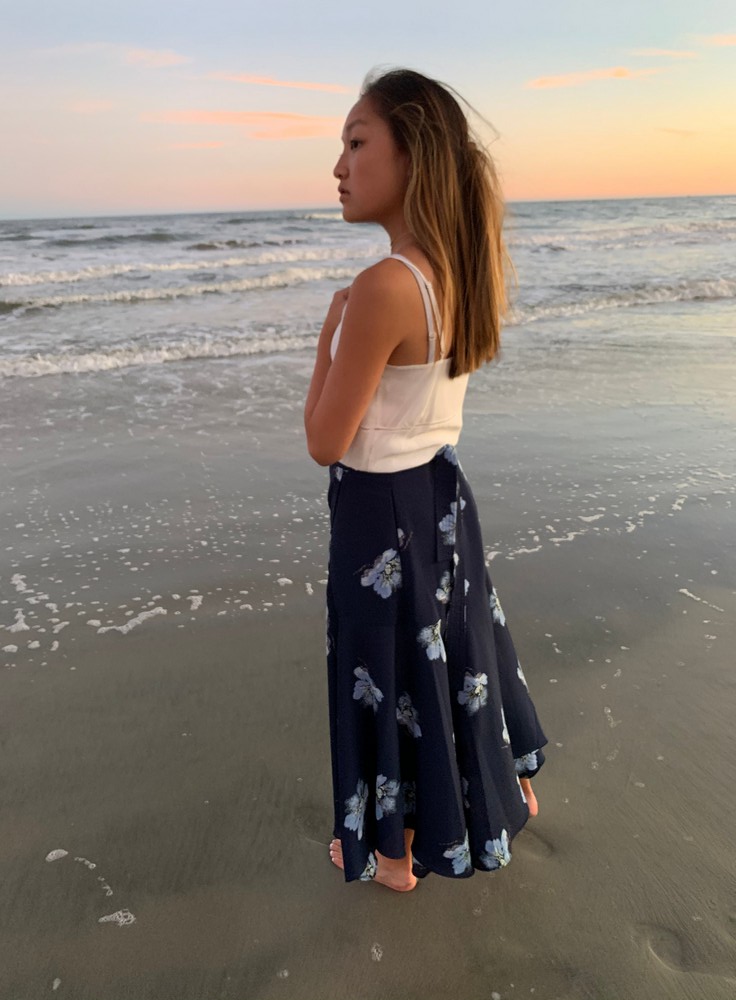 Can you open up a bit about your work and career? We’re big fans and we’d love for our community to learn more about your work.
Well, I like to consider myself an actress. The journey hasn’t always been easy though and it’s definitely far from over. I started about 4 years ago when my mom signed me up for a random acting camp in the summer and I kind of liked it so I stuck with it. At first I didn’t really take it seriously and considered it a hobby. But then it came to a point where I just couldn’t live without it. I don’t know — there’s something about getting lost in a scene that I got addicted to. And that leads me to pretty much where I am now. So far my only role has been the NBC show “Council of Dads” which was the biggest dream come true. Seriously. I cried so hard when I heard I got the role. But before I got the role, I’d considered quitting. Acting is really hard and honestly very draining. You can train and get better but if you never book any auditions, it’s hard to keep going. That’s where I was 2 years ago before my first role. I’d auditioned like crazy and just wasn’t getting anything. I remember it being a rainy Wednesday and telling my mom I was quitting. The next day I got the audition that unbeknownst to me would change my life. I told her I’d just do it because I was quitting anyways. Safe to say that I didn’t quit.

But honestly, I battle that feeling everyday. Not booking, it’s hard not to take it personal because it feels like a personal rejection. But you can’t look at it that way. And thought it’s hard, I don’t. I’m truly grateful for every audition I get because it’s the chance for me to do what I love for an hour. And I know that one day, something will stick and I’ll hit my mark. But it’s not that time yet so I’ll just keep practicing and training and never giving up.

Practicing is also loads of fun for me. Every Thursday night I take an acting class over Zoom which is the highlight of my week the majority of the time. I’ve really become close with all my classmates even thought they’re in California — we have a group chat and have really stayed in touch which I love. The teacher is also amazing. Johnny truly appreciates the craft of acting and it’s such a privilege and a joy to work with him and the Marnie Cooper School of Acting.

But I’ve also had help from so many other coaches throughout my journey. Jordan Brown was one of the first people to believe in me and she’s a very talented actress herself!! Mornell Studios also helped me find my own voice and not “act” while on camera. I still use the line-learning trick to this day and will for the rest of my life. My agents Barbara and Jessica are a tremendous support system and I’m grateful for everything they do. Lauren Halperin is the founder and co-owner of The Working Actor Group in Atlanta and I’m so lucky to have her support and guidance in my life. Also, Paris Feldstein casting: you guys gave my first role!! I can’t even describe how meaningful that is. Also, Dustin Lewis, Erica Arvold, and Richard Warner. All three have been there when I first started out and always believed in me. Considering that I wasn’t too good when I first started, that means everything. All of the coaches, agents, and casting directors I just listed are apart of my journey. They each taught me lessons related and not related to acting that I’ll cherish for the rest of my life.

I guess about my brand and story… hm. I guess I can say that it’s far from over. I feel as if I haven’t even started. I guess my brand is really about doing what you love, no matter how old or young you are. As John Green once said “you have to get lost before you can find yourself.” I’ve experienced a lot of setbacks this past year, both mentally and physically. Im growing and changing everyday and have learned that sometimes the hardest lessons come with even worse experiences. But it’s all part of the journey. And one day, I hope to be the first Korean and Japanese girl to win Best Actress at the Oscar 🙂 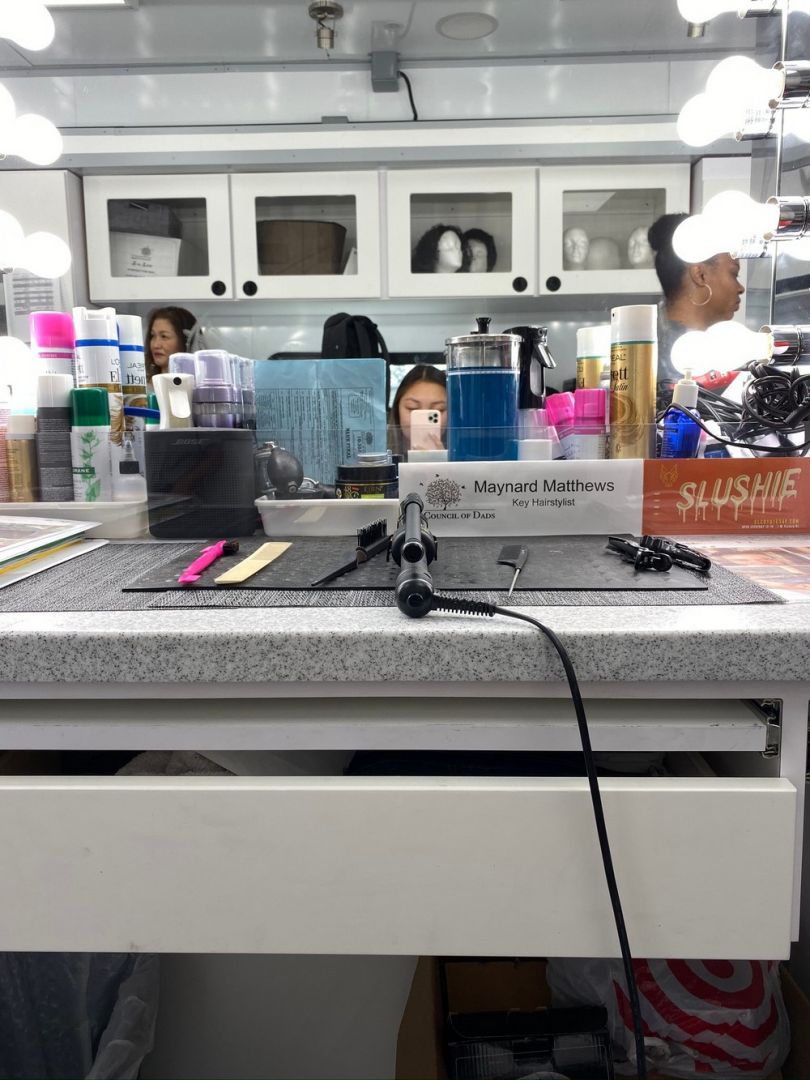 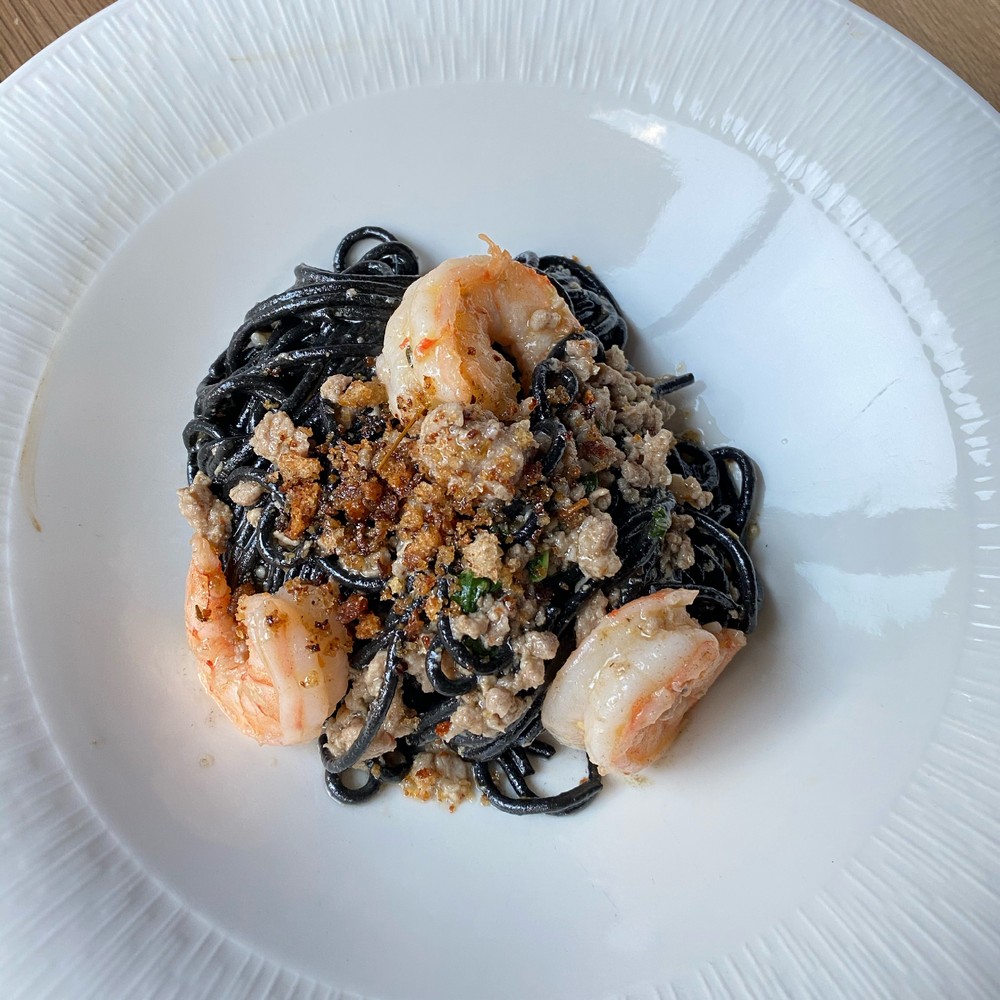 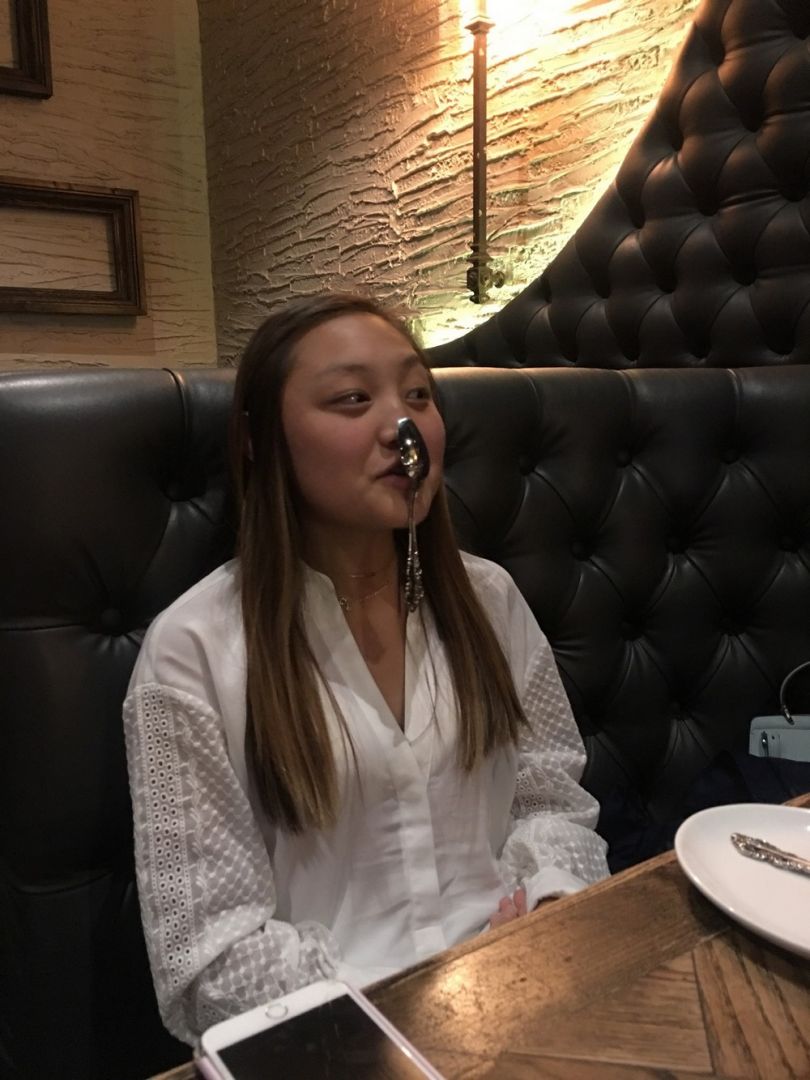 If you had a friend visiting you, what are some of the local spots you’d want to take them around to?
Ooooo. This is gonna be hard since I’m so indecisive!! Probably because I’m a Libra haha.

I’m a huge breakfast and brunch person so definitely a cute breakfast place. Maybe Cafe Intermezzo or Le Bilboquet in the Shops of Buckhead. Original Pancake House is always good too. My childhood consisted of their Banana Pancakes every Sunday.

After that maybe Six Flags. I think the drive is worth it and I’m a huge roller coaster rider. I love everything fast and big. It could be really fun to go to a drive-in movie theater as well or just a theater in general. I love going to see movies. There’s something nostalgic about the popcorn and chairs and big screen. I think the High Museum could be really fun too. Very artsy and stuff. The Beltline is also a really cool spot to check out since it has a lot of restaurants and shops. Hmmmm. I really feel like I’m blanking on everything. Honestly, im a bookworm so Barnes and Noble is a go-to place for me. Oh! We can go to the Swan Coach House and ATL History Center which is literally across from my house. They even serve tea which could be a super fun lunch spot!! The Georgia Aquarium and World of Coke are also worth a trip. Probably maybe for a day since both of those are close to each other.

I think simple things like driving around and listening to music at night is really meaningful. Yelling lyrics at the top of our lungs and watching all the lights. If my friend comes during the fall, definitely go to a Georgia game in Athens. Those are always super fun or an ATL United game or Braves game. I grew up watching and playing sports so I’ve always been into them, especially Georgia.

To be honest, fast-food runs could be an option. I don’t eat fast food personally, but late night trips to Publix or Steak n’ Shake are hard to resist. It’s really the simple things that can be so meaningful. Baking is also fun so we could bake cakes and cookies or maybe even attempt to cook dinner. Hopefully they can cook because I definitely can’t. 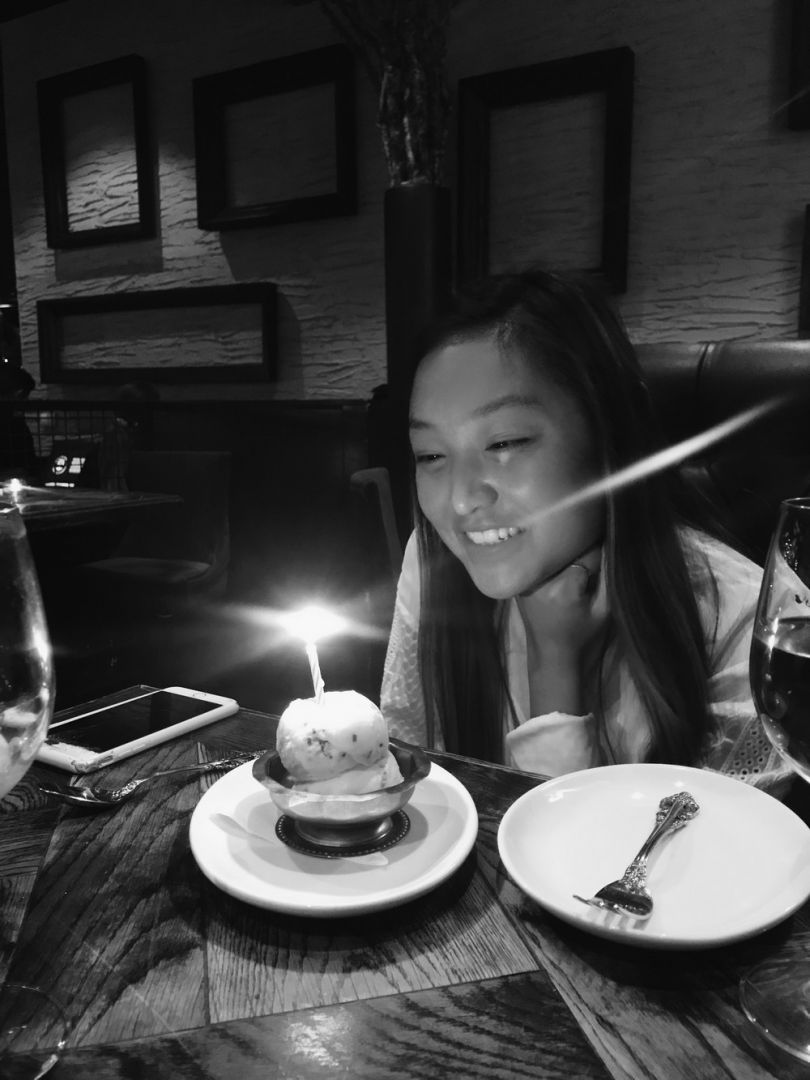 Shoutout is all about shouting out others who you feel deserve additional recognition and exposure. Who would you like to shoutout?
Definitely my family. I think this past year has really taught me who I need and want in my life. My family has seen the worst and didn’t run away or turn me down, but they accepted me and stayed. I’ve been grateful to have a handful of close friends who’ve truly seen me at my worst and chose to be there for me. I can’t thank them enough for that. And honestly, I have to thank Jenny Han and Cassandra Clare, the authors of my two absolutely favorite series. Jenny Han and Lara Jean are the ones who made me love reading. It was when I read about Lara Jean that I saw the world differently. And Cassandra Clare… I can’t thank her enough for her series “The Infernal Devices.” I truly can’t put into words how much she and her series did for me and means to me in my life. Hopefully I’ll get the chance to tell her one day!! Also, thank you to Zedd and Gryffin for their song “Inside Out.” That song has been played on so many breakdowns and times when I just need to feel heard — so thank you for making that song. And i have to include Shawn Mendes. A couple years ago I he wrote an Instagram post that I stumbled upon after having a very bad day. He said that to whoever was reading his post, he believed in them and knows what it’s like. I have that post screen shotted and look back it to this day. So thank you Shawn, you really saved me that day!! Honestly, every author and director who I’ve had the privilege of reading and/or watching their stories — thank you from the bottom of my heart. I’ve been to Caraval, a magic school, faerie lands, dystopian America, and traveled back in time. I’ve been heard and seen and related to. And that is truly special. Thank you so much to every single person and thing I mentioned because you made me feel that it was okay for me to be myself.