We had the good fortune of connecting with Yasmin Josiah and we’ve shared our conversation below.

Hi Yasmin, why did you decide to pursue a creative path?
I have always wanted to be a storyteller in one way or another. I want to be a truth-teller, to explore and examine the aspects and complexities of this world that are needed in order for us to evolve. Societies across the world are continually oppressed and submerged with deception, bias & misinformation. It can be extremely disconcerting and upsetting to exist in times like these. However there is a beauty in art and creativity that seemingly bring about human connect, understanding, unity, hope and evolution. Whether it be viral videos, media or art. Art is everywhere from marketing and advertising, to architecture to entertainment to medicine to technology. It’s all around us everywhere, it is attainable and it is possible because it is already in our hands or at least within reach. We have all the tools necessary to want and create better for us all. From a young age I would notice how much all those things influenced others, how it could make people think differently, expanded opinions and inspire even the most conservative of people. I also saw the opposing side of how all those things were used to keep folx, pitted against each other, to keep the marginalized down and oppressed and to keep us turning the wheel for the colonialist and capitalist powers that be. As a filmmaker and storyteller, I work to use film, social activism and organizing to blend propaganda with perspective and to amplify the voices of the liberation movement. To give us access to the things that are already within our global toolboxes: equality, freedom, accessibility and liberation for all. 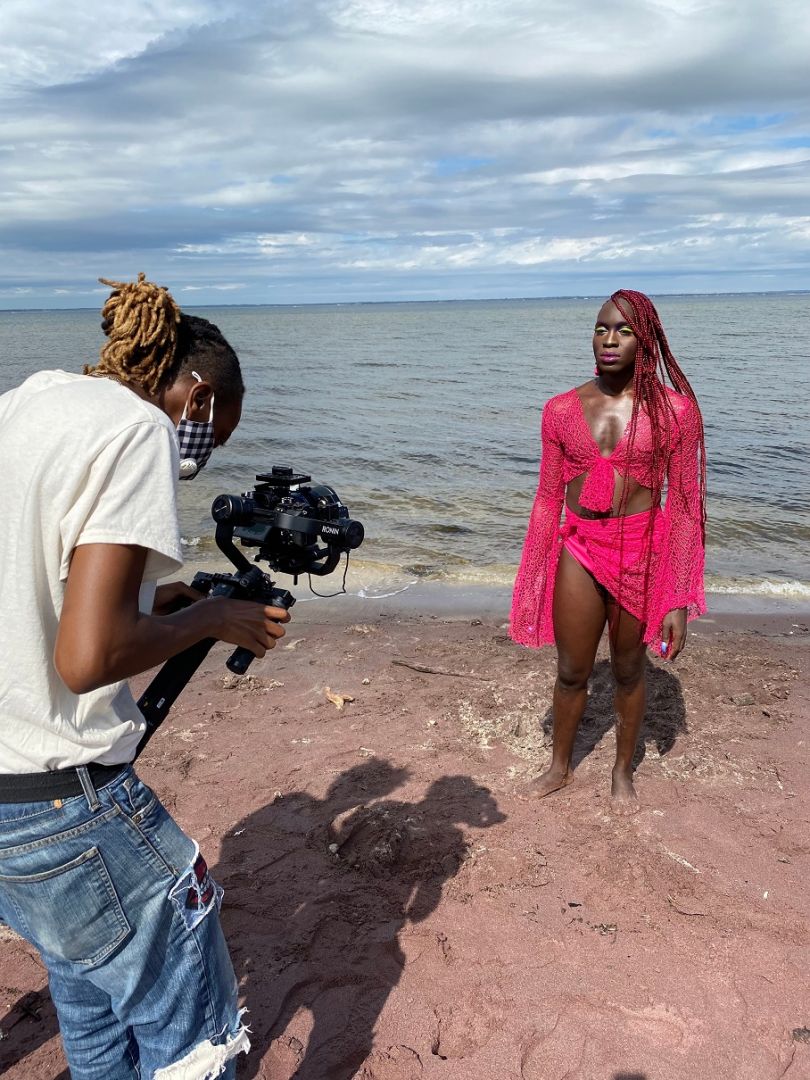 Can you open up a bit about your work and career? We’re big fans and we’d love for our community to learn more about your work.
I didn’t have film or photography classes in my schools however my parents always put me and my siblings into a variety of art workshops and community led-creative spaces. I’m really grateful for that because it allowed me to expand my ideas and dreams, perspective across so many mediums. I was drawn to watching films and tv a lot. I was obsessed with a naive dream of “Hollywood”. At least what I thought it was at the time. As I grew up I realized that my intersection of identities brought a lot of intersecting stories. I am dual citizen of the US and UK. My mom is African-American and my dad is Antiguan, and immigrated to the UK. I was born in Brooklyn and grew up in North London. I spent a lot of my childhood back and forth in both countries. I am also queer and non- binary. All of these things had me constantly answering questions or even questioning the things around me, including myself, the industries, social constructs and systems that existed around me. After I finished school in the UK at 18, I wasn’t set on going to uni so I took a gap year. I worked in museums and a dvd store. After different, altering experiences at 19 I was moved to reflect on these life experiences. And I found that I wanted to do it through film. So at 19 on my gap year, I wrote and directed my debut short film. In June 2015, I wrote and directed my debut short film Consent: The Truth About Sexual Assault. It was a short experimental film to raise awareness for the growing number of sexually abused victims in the UK. My crew was made up with six women & one guy, four of us black or poc. It did well online and in a few festivals. It came runner up in the Malala Yousafzai Youth Challenge. It really set the course to me wanting to pursue a film degree. That same year I was accepted into the Film Conservatory at SUNY Purchase in New York. I can say I did face a lot of barriers as most marginalized folx do, particularly as a black womxn, and as a black queer and trans person in predominantly white institutions and/or discriminatory spaces. I would have to get used to that feeling. As it is something that was & is directly reflected in the demographics of the film industry and Hollywood itself. Despite being in New York and my film year being the most diverse it ever had, I was still only one of two black femmes. And the only dark-skinned one. I had a lot of frustration and hardships in that but I also realized college was a place to set your own tone in a way of learning a lot of lessons in and out the classroom. How to be an ally to other marginalized folk and so on. I did meet amazing people, and have teachers who were great, and helped developed my writing and directing. As a filmmaker it allowed me to become dedicated to producing social narratives. From them on I continued to create dynamic videos to raise awareness and advocacy for the most marginalized in our societies. To bring about radical change. To work with fellow artists, brands, orgs and bring their visions to life. After I graduated in 2019, I refined my work; to use filmmaking, activism and organizing as a tool to blend propaganda with perspective and amplify voices of the liberation movement. I even started to enjoy getting my voice & self out there in front of the camera too. An above all I made a deal with myself to pursue truth, visibility, accessibility and to always move with integrity.

Let’s say your best friend was visiting the area and you wanted to show them the best time ever. Where would you take them? Give us a little itinerary – say it was a week long trip, where would you eat, drink, visit, hang out, etc.
I think the city (NY) has changed a lot in the past 5 years but also with the pandemic. But I think prospect park has always a safe haven for me so definitely recommend there. I would also say Sol Sips, a vegan spot in bushwick (bk) . It’s black femme owned by Francesca Chaney. The food is 10/10, I met her through friends and I think she’s my age too. She’s all around killing it, and did amazing mutual aid work during COVID too. Above all the menu is just *chef”s kiss* the Chick’n Biscuits? Unreal!! I miss comedy shows, specifically at The Jane Hotel. So that would def be on the list when things open up! With living in Baltimore I have loved going to thrift & vintage stores here. They have a chain called Thrifty’s or Prime Thrift. And it’s probably at a 1/3 of the New York thrifting prices. I’ve also been able to find film cameras and lenses for crazy cheap which has been fun. I like the harbor downtown & skate park in Hampden, which is always cool to visit. Baltimore also has Nando’s which is one of my top fav restaurants, it’s only ever been in the UK. But they expanded and have a few on the east coast/north america. I love that Baltimore is one of those places cus it really reminds me of home. Baltimore is also only a short train ride from DC which is great too & a 3hr ride to New York, so it’s really accessible really. I’m still exploring it here and hope to find more when it’s safe to do so. 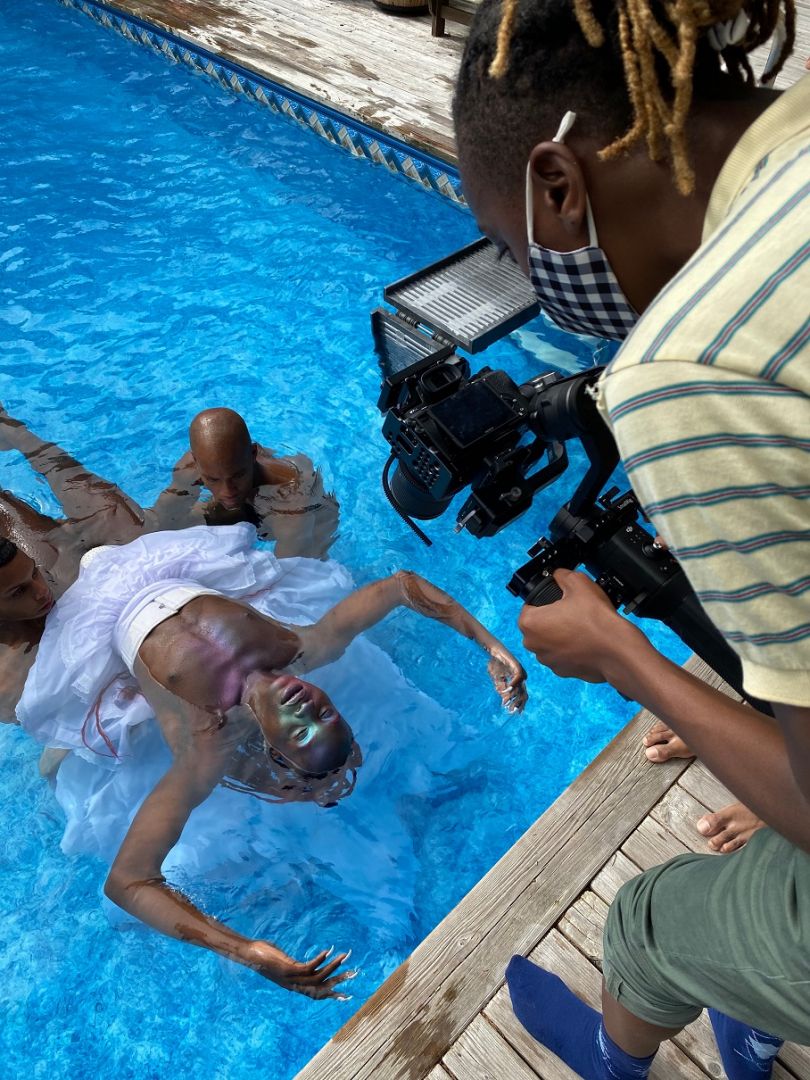 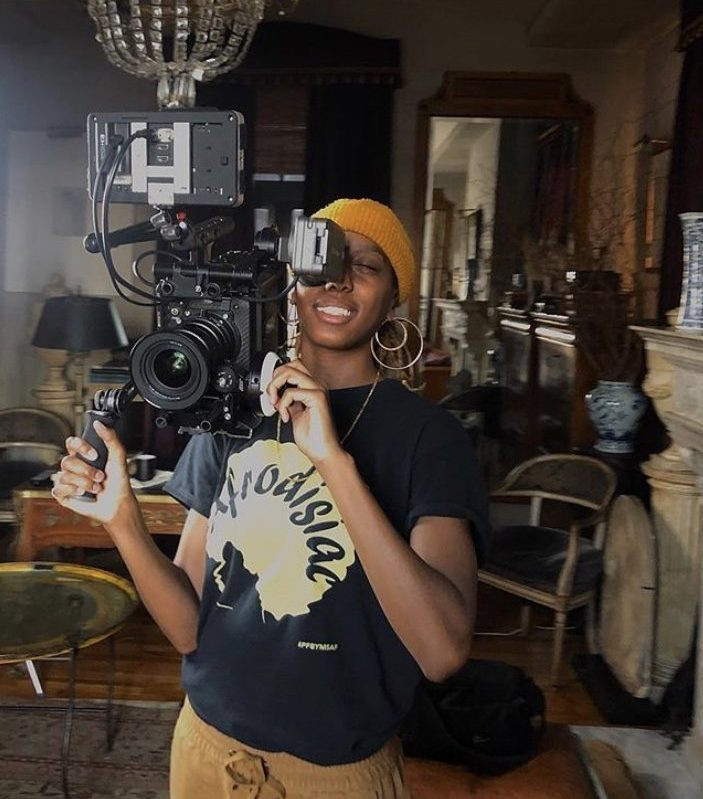 Shoutout is all about shouting out others who you feel deserve additional recognition and exposure. Who would you like to shoutout?
Wow where do I begin: shout out to all the powerful and unstoppable forces that are black femmes. My mom and my sisters, who always encouraged and supported me to pursue and to always step towards the things I wanted to achieve. They continually inspire me and uplift me. I also want to shout out my brother and dad too, who continue to want to best for me, equally and me to them. My grandparents, aunts and cousins ones , have passed and also those who are still here. My family are deeply revolutionary, they run deep and I owe a lot to them. I am always inspired by my chosen family & friends who all are forces of nature and are dedicated to making the world better, in all spaces that they occupy. (Rashida, Nnandi, Liza, Thalia, Bobby, Bree, Gabi, Claire & many many more love my peopl always near & far.) Shout out the group LEGACY. BQPC ( A black queer production collective. They are a group of Black queer artists based in NYC. They focus on uplifting, under appreciated and underfunded Black queer voices and experiences by: creating space for artistic endeavors. I was lucky to work and be hired for a project with them last September. I was on an all black all queer set, full of immense talent and creativity. It truly changed and inspired me deeply. It reminded me that these spaces, black futures and opportunities are possible. And when space is created, magic happens and can inspire many! @legacy.bqpc I also want to shout out black women who have always been at the front lines and who’s words and truths push and propel me to accepting nothing less than liberation for all. (Assata Shakur, Angela Davis, Fannie Lou Hammer, Sonya Renee Taylor, Audre Lorde, Amber Ruffin to name a few) Artists like: Little Simz, Issa Rae, Angela Bassett and Michaela Coel.