We had the good fortune of connecting with Maurice Sims and we’ve shared our conversation below.

Hi Maurice, what was your thought process behind starting your own business?
I started my own business because I disliked the long hours and the mandatory 6 day work week my former employer required. 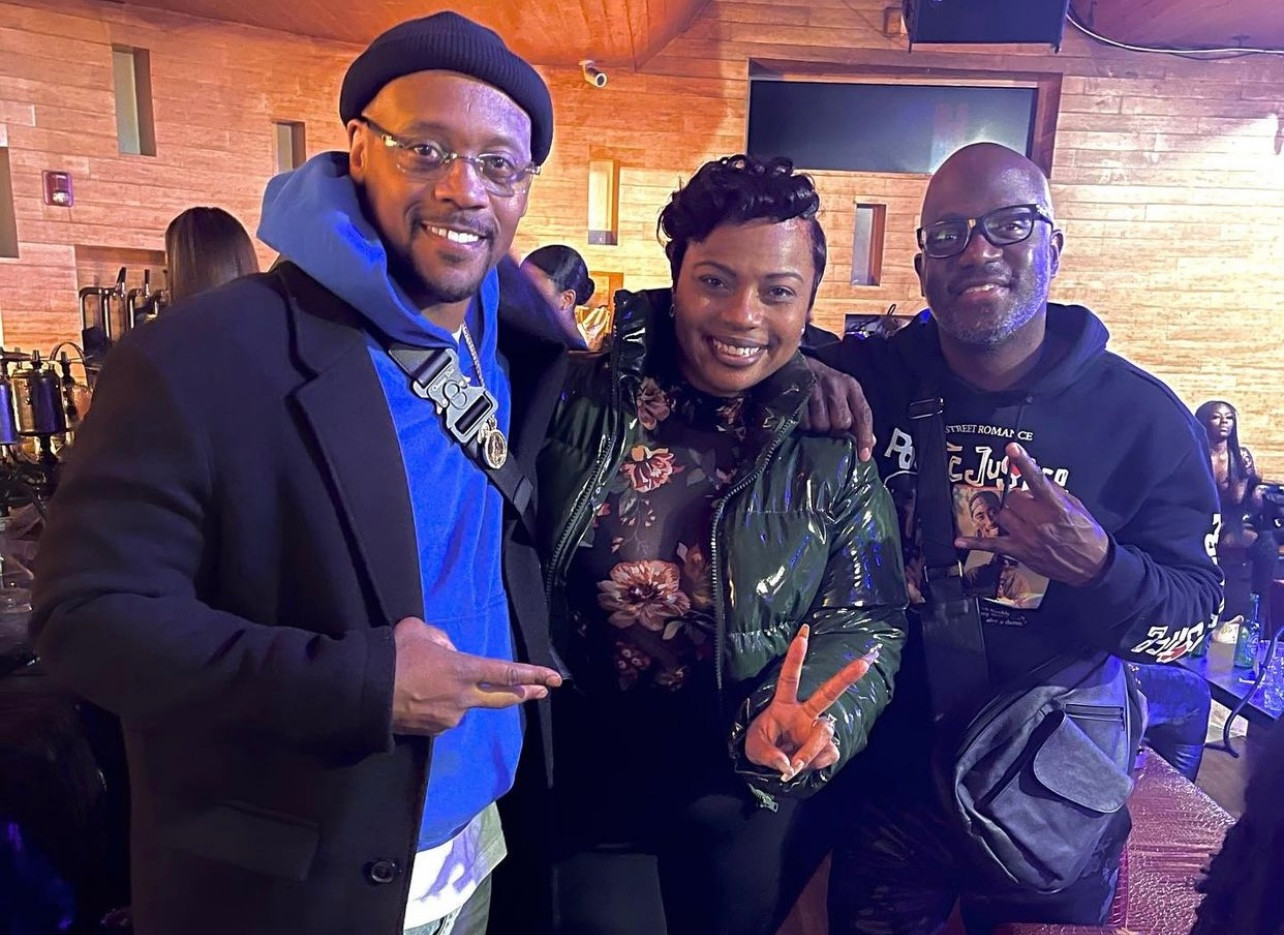 Let’s talk shop? Tell us more about your career, what can you share with our community?
Before I discovered my passion for producing stand up comedy shows. I started out in retail management for 20+ years and transitioned into mass transportation. I spent 13 years with Foot Locker, 8 Years with Uhaul, 5 years at Georgia Tech (I managed their contracted campus transportation) basically, their Marta bus system.

I didn’t realize at the time, how much my retail management experience would help me in the later part of my career because it taught me how to market to various demographics, how to predict trends in regards to how folks spend their disposable income and when they spend it. Knowing this information, lets me know when or when not to do a show, amongst other valuable things that can prevent you from taking a loss as a promoter. More importantly, retail taught me how to provide excellent customer service and inspired the experience I always want to give patrons at all of my events.

I am most proud of all the comics who started on this journey with me, have gone on to do great things. For example, Comedian Karlous Miller and Clayton English both started out hosting our weekly shows around the city. Both have gone on to bigger platforms, became internet sensations and Clayton English even won NBC’s “Last Comic Standing” comedy competition. Comedian Tyler Chronicles became our go to host when they were no long able to do so. He even went on to Co-host V-103’s mornings show with Bigg Tigger, appeared on Wildin Out for several seasons and now write’s for TBS’s “The Cube” as well as other projects on WE TV. Comedians Zooman Miller, Ashima Franklin and Jennifer Thomas, all tour currently or toured with Comedian Katt Williams. They all hosted, featured or headlined at our local events over the last 2 decades.

It was not easy to get to where I am today. I started this back in 2003. My first few shows (all 3 were unsuccessful) also were on the road in my hometown of Selma Alabama. Yes, I was raised in Selma Alabama, the birthplace of the civil rights movement. My second cousin is Dr. F. D. Reese (our grandparents are siblings) Dr. F. D. Reese is also the individual who wrote Dr. M.L. King the letter informing him about the unfair voting requirements the city of Selma was practicing to disqualify a large percentage of blacks from being able to vote in local elections. He then invited Dr King to Selma and that’s how MLK ended up in Selma over a 3 year period back in the mid 60’s. Not only was he a relative, but later on he was my Junior High School Principle, Senior High School Principle, Pastor and Assistant Superintendent through out my years in school.

Back to my point. My first 3 shows in Selma were unsuccessful because they were not profitable but they were extremely funny. I didn’t have sponsorship money to cover the costs, I used my bonus checks from my job at Uhaul as the operating money and I was hoping to pay myself back after the show. Unfortunately, the shows never sold out, the attendance was low and I was left in the red. Those unsuccessful shows were definitely learning opportunities and I waited 2 more years before I did any more shows because I couldn’t afford to take those financial losses. In the meantime, I went to a comedy show around the city every night for 2 consecutive years. The purpose of this was for both self entertainment and to network with the next generation of comedians I saw blooming around Atlanta’s comedy scene. I was sitting back watching other promoters, learning, developing my game plan to take my brand to new heights and be the alternative to the 3 comedy clubs open at the time in the mid 2000’s.

I got to where I am today because even when comedy wasn’t profitable, or venues were empty and the work became overwhelming at times with little or no pay to show for it, I never quit or gave up. I also kept a day job or multiple jobs, while also doing comedy 2-5 nights per week. I did it all because i loved stand up comedy unconditionally and realized its my passion and on this purpose on this planet.

I learned that success will not happen overnight. I also read somewhere that “it takes 10 years to become a overnight sensation.” Well that is so true on the average in my opinion. Most mildly successful folks that I have encountered, didn’t reach the “cruise control” point until after a decade of consistent effort & grinding. In addition, I do this for pure love, joy, fun and for the happiness/smiles it brings to hundreds of folks faces every single week at a venue near you. 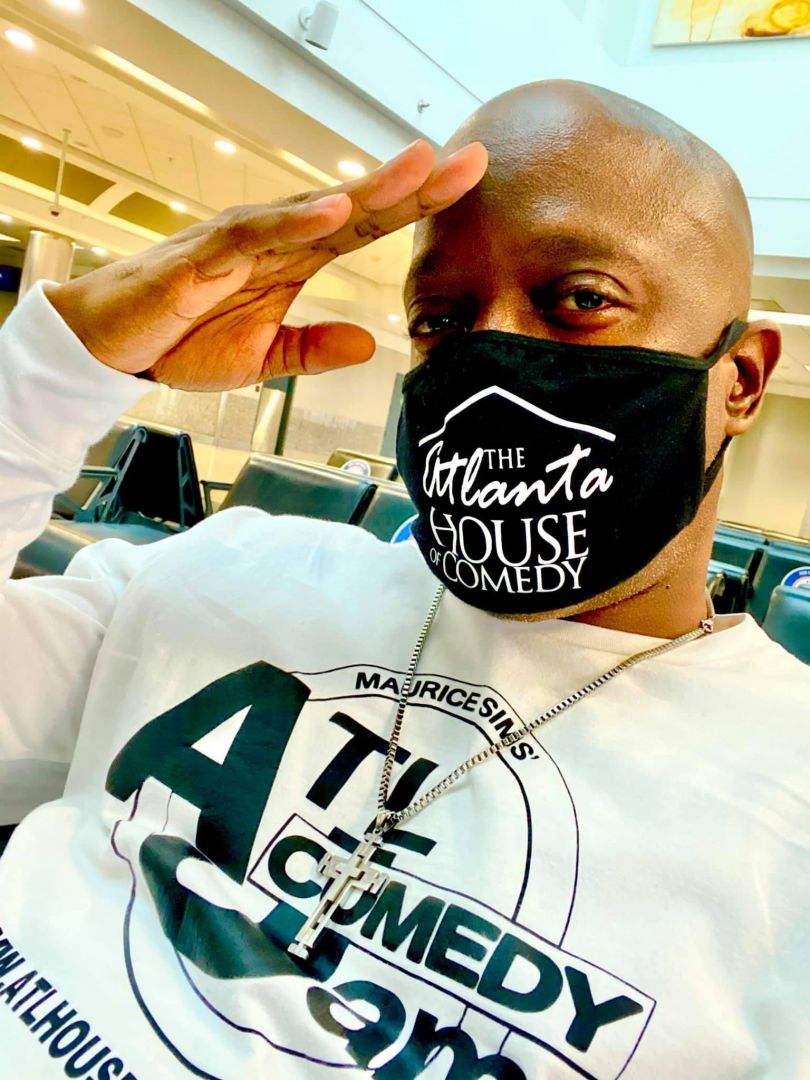 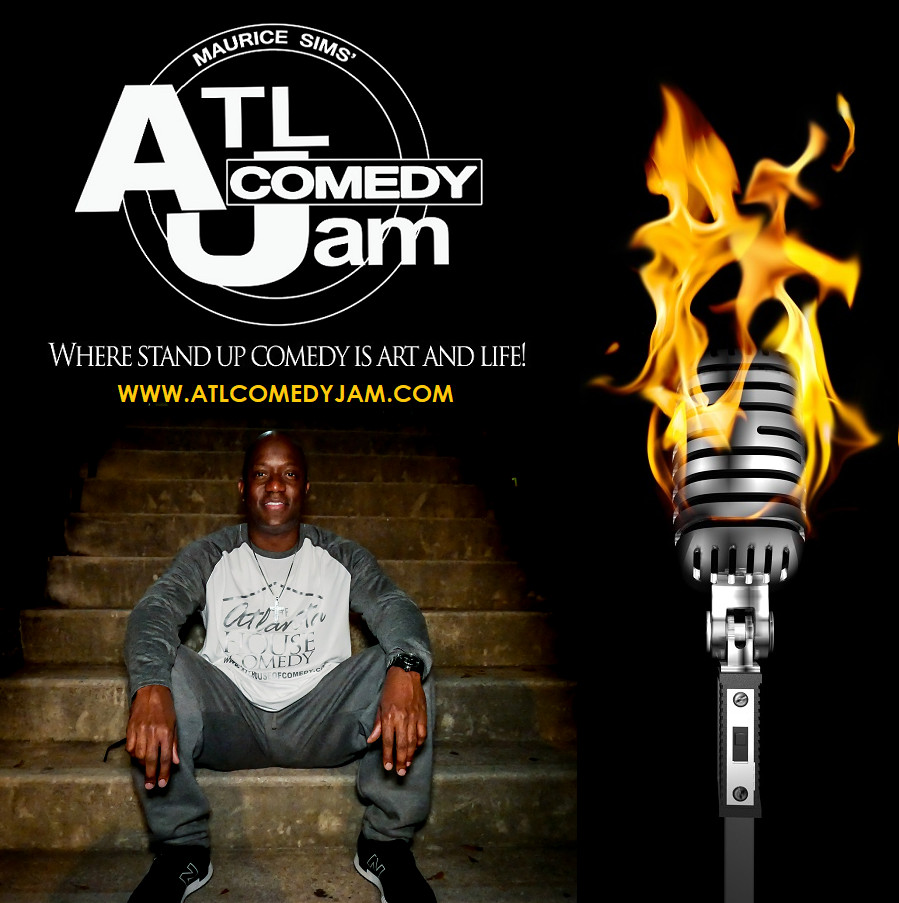 Any places to eat or things to do that you can share with our readers? If they have a friend visiting town, what are some spots they could take them to?
FUN Places 1. The Battery
2. Atlantic Station
3. Ponce City Market
4. Krog St Market
5. Piedmont Park
6. Downtown College Park

I go to these places for the ambiance, multiple restaurants/bars, live entertainment venues and diverse patrons.
I also have Falcons & Hawks season tickets! I love the Braves too, but sitting in the heat for 80 games during the warm months isnt my cup of tea LOL. 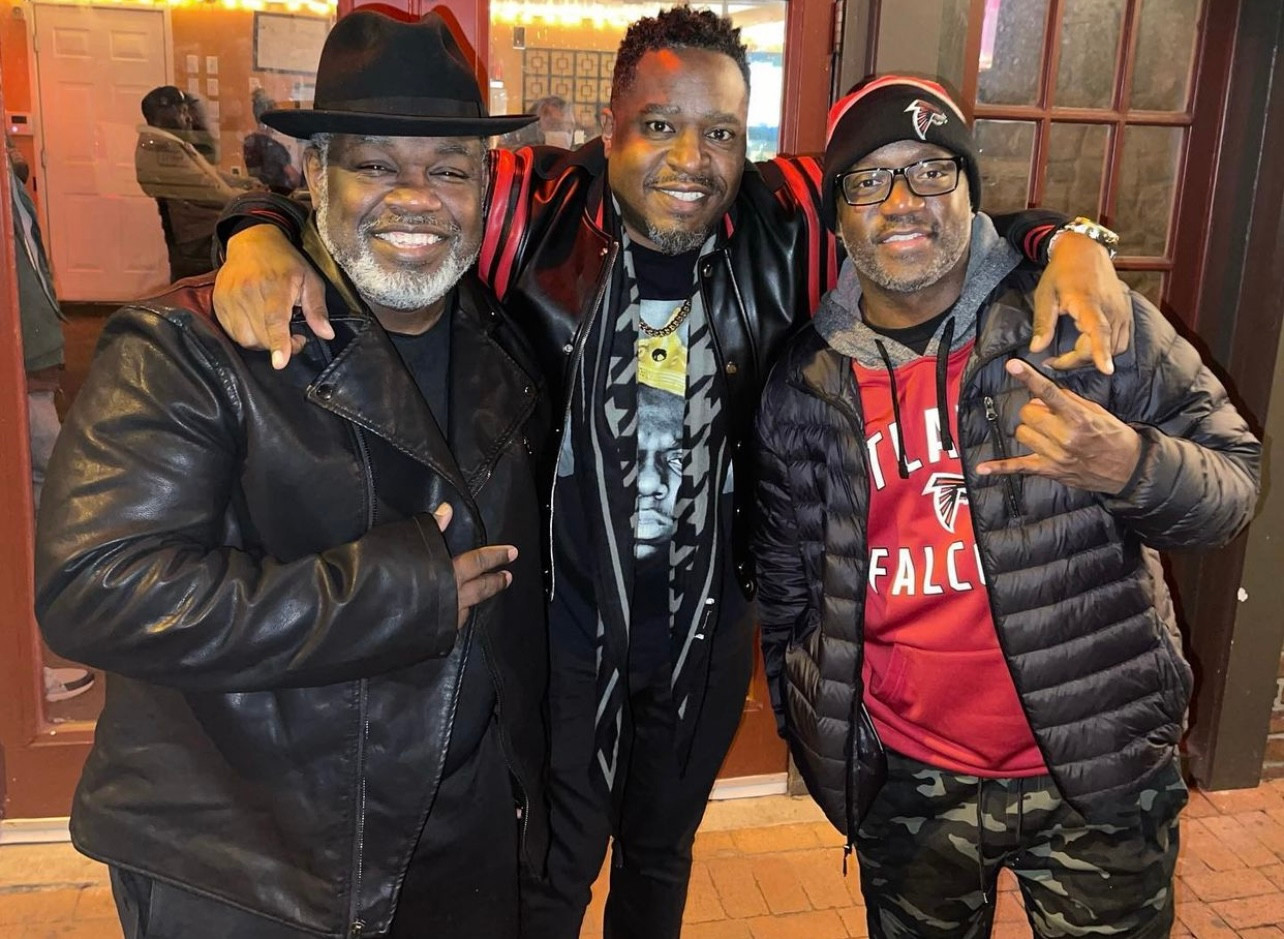 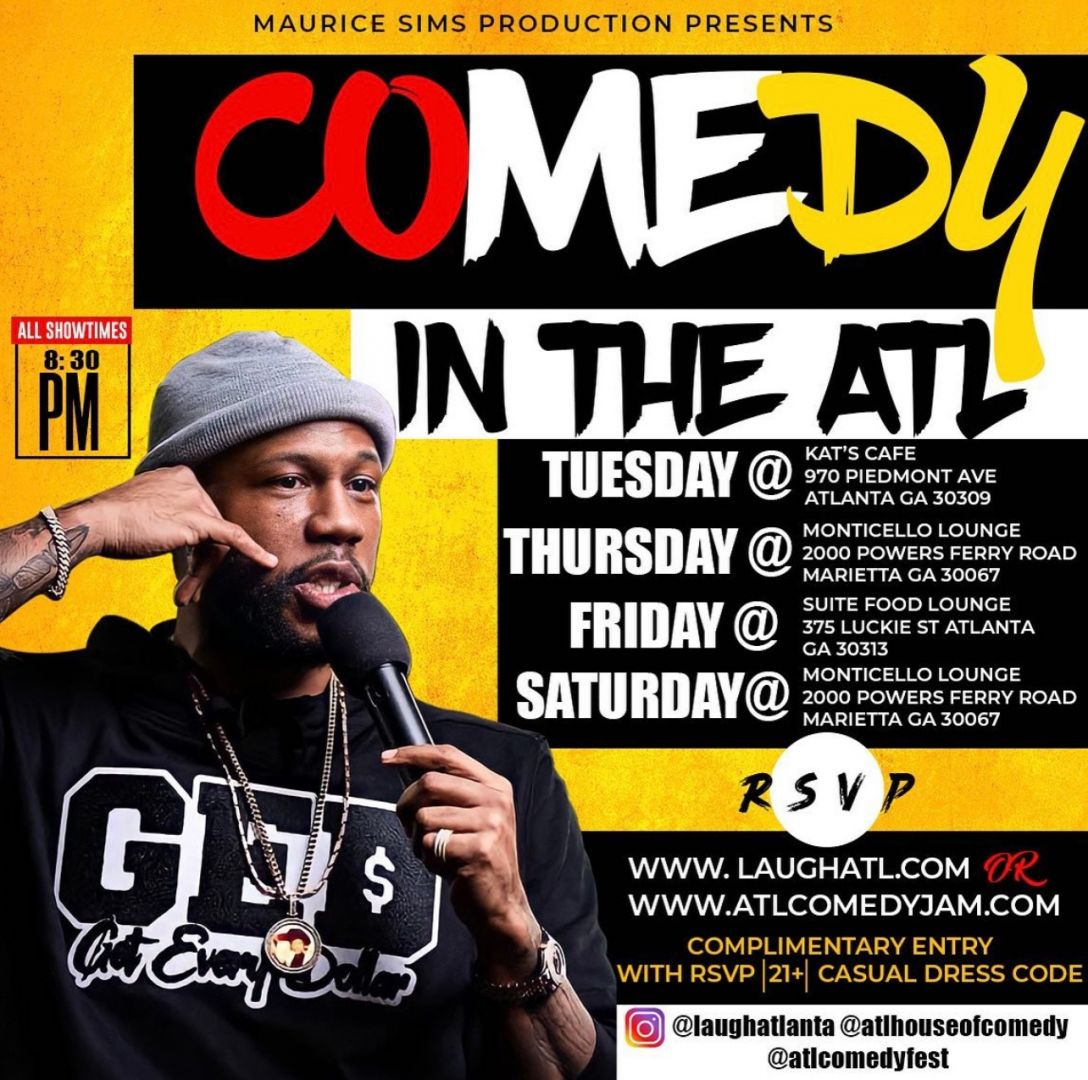 Shoutout is all about shouting out others who you feel deserve additional recognition and exposure. Who would you like to shoutout?
Kats Cafe in Midtown ATL for giving me my first opportunity back in 2006. Attorney Thomas Dixon who gave my first big break producing stand up shows at his 5 ATL based venues.
Steven White for showing my how to buy domain names, collect data on the internet & guild my first website.
Robert Martin from RAAP Network for giving me my first annual NYE comedy opportunities on a bigger level.
I want to thank the citizens of ATL for supporting my events over the last 16 years. 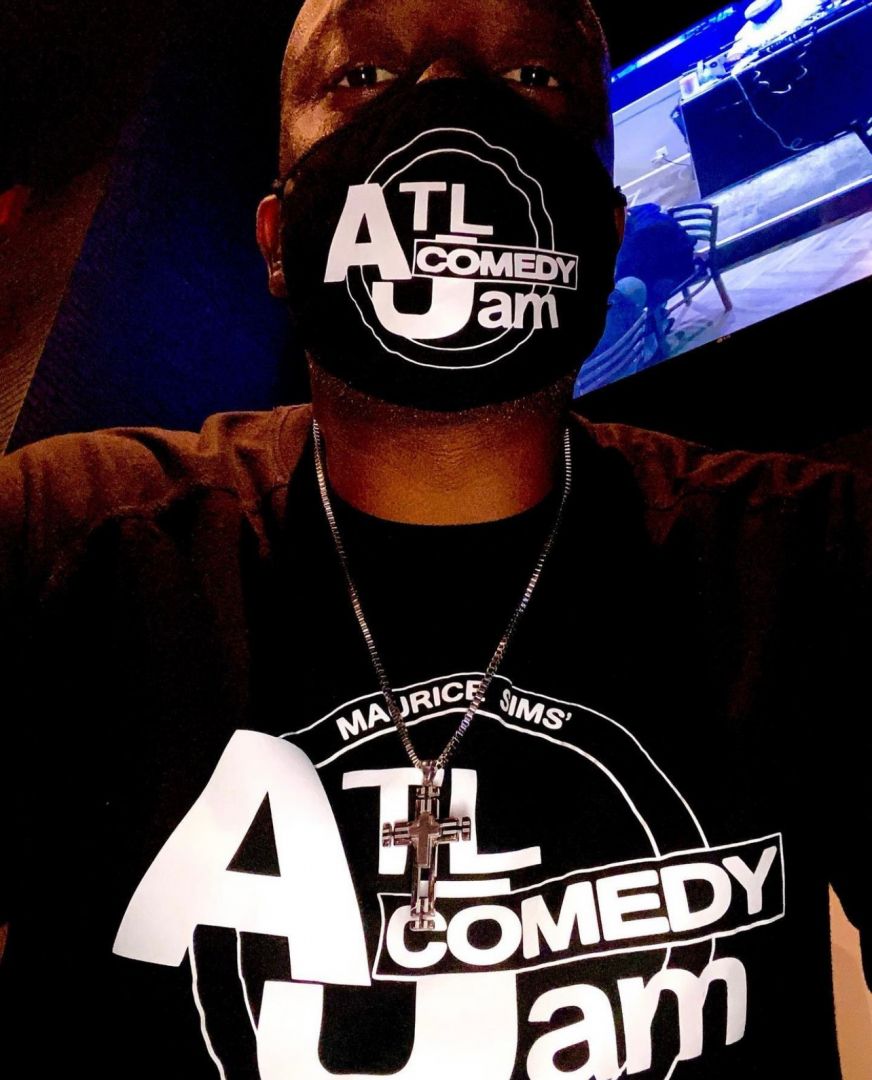 Other: Grand Opening of my new comedy club has changed. We are revitalizing south Peachtree St SW and the first new business there.

We are the only 100% minority owned comedy club in the city of Atlanta.  FYI, the other 2 comedy clubs are in Norcross and Hapeville.